February 15. Malate is as busy as the night before. The restaurants and bars are filled with couples on last minute dates, with the drunk and the lonely who hope that they might still get lucky and have a Happy Valentine’s.

Around the corner from Nakpil Street, in the back alleys where the waiters, bartenders, and delivery boys gather during their break time, stories of the strange and unusual cast of Malate are reviewed and discussed.

They often talk about the little sampaguita girl and how if you ever bother to look at her eyes, you’ll notice her reptilian, vertical pupils. If you shoo her away and don’t buy flowers from her, she’ll stick out her forked tongue and spit at you.

Someone would usually mention that man with the bouquet of roses, seen at the corner where the street lamp never works. They say, if you happen to be standing there while waiting for a jeepney or taxi, you’ll suddenly notice this man standing right beside you. You’ll notice his polo shirt is damp with blood; that he’s not holding roses, but he’s desperately trying to push his intestines back into his stomach. He’ll look at you and plead, “Take my wallet. Please don’t kill me.” You run away and if you’re brave enough to look back, the man would be gone. “Take my wallet. Please don’t kill me,” his voice would echo down the road.

Of course, they’ll also tell you about the blind beggar at the park; how if you give him exactly three pesos he will tell you the exact date and manner of your death. Supposedly, for the right price, he will tell you how to avoid your predestined demise.

On this particular night, at the back alley of the Black Rose Bar, the waiters, bartenders, and delivery boys are talking about one particular lady. They have already placed their bets on whether or not she’ll appear tonight. Tonight, the customers will be annoyed that the waiters won’t be as attentive, that some of their orders will be wrong, all because the waiters will be keeping their eyes on the door, waiting for her to finally arrive.

They never do catch her walking through the doors of the Black Rose.

Bernie the bartender is always the first one to see her. Actually, she’d be the one who’d call his attention. While wiping the bar or serving another customer, he’d suddenly feel this fingernail tap him on the shoulder. He’d smell her perfume first before he’d look and know it was her. 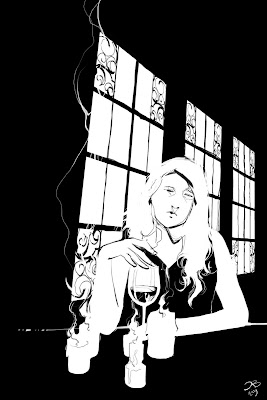 For the past four years, Bernie has been winning the bet.

He would already have a clean wine glass ready, so he wouldn’t have to trouble himself from getting one from the back of the cabinet. As always, she would order the house wine. And there she would stay for the rest of the evening, perched on that bar stool like a lioness; which would inevitably attract the other denizens of the watering hole; the drunks, the lustful, the ones who feel lucky. They’d all approach her. Try to buy her a drink. Try to make conversation. But they would all fail. She would kindly refuse them. Ignore them, mostly. Bernie took note of how many times the lady in the red jacket would look at her watch, then the door, then take a sip of wine.

Then at midnight, she would excuse herself and tell Bernie that she’s just going to the ladies room; that if anyone should look for her, Bernie should tell them to wait by the bar. Bernie’s tried to ask for her name or the name of whoever it was she was waiting for, but she would never tell.

12:13am. The air conditioning unit would shut down. Nobody knows why. It just conks out at that specific time of the year and the whole place would immediately get as hot as an oven. Dundee, the manager, has already asked a dozen electricians to check why the aircon does that and no one’s been able to provide a proper answer. Which is why Dundee’s given up because he knows at 1:03am the aircon will kick in and start working again. The same sense of certainty is what Bernie holds that the lady in the red jacket will not return to finish her wine. She will not be seen until the following the year.

Trese remembered that the Black Rose was once called The Waiting Place, which burned down six years ago. The owner considered the place unlucky and sold the spot.

So, on this particular night, as soon as the lady in the red jacket appeared, and right after Bernie poured her a glass of red wine, Trese sat down on the bar stool beside her. Trese motioned and also ordered for wine.

“Waiting for someone?” Trese asked.

The lady made a small nod and answered, “No. Not really.” She looked towards the door and then back to the bottom of her wine glass. “I’m just killing time.”

“Don’t you just hate it?” Trese said after she took a sip from her wine glass.

“When they arrive late.”

The lady smiled. “How true.”

She looked towards the door again. A heavy-set fellow entered and was soon followed by his wife. The lady sighed. “He’s always late. To think we’d usually meet here because it’s closer to his office.”

“And what’s his usual excuse?”

“That he’s trying to find a new excuse to tell his wife why he can’t come home.”

“But who I am to complain?” said the lady as she slid off the bar stool. “I just have to go to the ladies room. If a harassed looking fellow comes along, tell him I’ll be back in bit.”

Trese watched her merge with the crowd in the bar and followed her inside the comfort room. There were three girls re-touching their make-up. She waited for the ones in the stalls to come out.

The lady in red was nowhere to be found.

Back at the bar, Trese got the lady’s half-empty wine glass. She returned to the bathroom and locked the door behind her.

A gust of wind forced Trese to step away from the sink. The wind seemed to be have been coming from the bathroom mirror.

The wine glass continued to ring, as if an invisible hand was still tapping it.

And the wine glass cracked and burst, exploding glass shards all over the room.
The wine sprayed all over the bathroom mirror. As the red liquid slowly slid down, Trese noticed that her reflection was not her own.

The lady in the mirror was crying.

Behind her, an older woman staggered in, cigarette dangling from the lip, carrying a bottle of vodka. She was singing happy birthday to herself.

The lady brushed away her tears and smiled weakly at the woman.

“It’s my birthday today,” slurred the woman. “My name’s Beth.”

Beth raised the bottle of vodka and slammed it against the back of Pamela’s head.

“I know who you are,” Beth said calmly.

And she hit Pamela once more.

“I know you’re the reason why Stephen’s leaving me.”

And she hit her again.

“I know you’re the one that Stephen truly loves.”

She poured the vodka all over Pamela, dropped the cigarette on the floor and Pamela burst into flames.

Trese looked at her watched.

And the air conditioning system of the Black Rose Bar promptly shut down.

When Trese got back to the bar, Bernie was smiling, collecting his winnings from the waiters.

“Did you find her?” Bernie asked.

“She never left,” Trese said. “She’s still waiting for her Stephen to come. “

Trese just paid for her drink and Pamela’s drink and stepped out of the Black Rose Bar.

The night wind felt cool against Trese’s face. Walking back to the Diabolical, she saw two duwende walking hand in hand; a diwata was handing out flowers to lovers near the park; the kapre on the mango tree was puffing out heart-shaped smoke rings; all which were unnoticed by the usual Malate crowd.

She was about to turn the corner when she noticed a man clutching a dozen roses. He was standing under that street lamp that never really works. As he stepped around the lamppost, the roses were replaced by his bundled bloody organs. He just kept walking around and around the lamppost, his image fading from being neatly dressed up, with flowers at hand to having his clothes all ripped and torn, with a gaping wound on his stomach.

Trese approached him and asked, “Is your name Stephen?”

The man stopped and looked somewhat relieved that someone asked him a question.

“Yes, I’m Stephen.” He looked at his watch and then looked at Trese. “Do I know you?”

“What are you doing here?” Trese asked.

“I’m… waiting for someone,” he hesitated to tell the truth. He looked around to check if anyone was listening or looking at them. “This is where we usually meet.”

Trese shook her head. Even in the afterlife, men can be so forgetful.

“Come with me,” Trese said.

Stephen looked unsure, at the same time looked helpless when he confessed, “But I can’t leave this spot. I have to wait for her here. I just can’t … ”

She reached into her coat pocket and pulled out a spool of white thread. She tied the thread around the lamppost and started to walk down the street. Trese turned around and told Stephen, “Follow the string.”

Bernie was surprised to see Trese return to the Black Rose Bar. He was even more surprised when he noticed she was leaving a trail of white string behind her.

“Two glasses of red wine, please,” Trese ordered. She tied the end of the thread to the stem of one of the glasses. She pulled out her kriss and tapped them.

The scent of roses filled the air, which made everyone close their eyes and take a deep breath.

“Belated Happy Valentine’s,” Trese greeted the couple at the bar.

TRESE : THE USUAL SPOT
Story by Budjette Tan
Art by Kajo Baldisimo
Posted by Budjette at 12:24 AM