TRESE: One Last Drink at the Diabolical

Alexandra Trese held the hot mug of coffee in her hands as she looked out the one-way mirror.

From the her private room on the second level of the club, she could see everything that was happening in The Diabolical.

It was a Saturday night and the party people kept streaming in and out of the club's ten-foot double doors.

After she inherited the restaurant from her father, she decided to convert it into a club. The place now looked like a crumbling chapel that was constructed during the 1800s.

She renovated it to keep up with the times, to make more money, and more importantly to create a neutral place; for not only did she inherit her father's friends, she also acquired her father's enemies.

She took a sip from the dark brew and looked at the right side of the club where she saw Hank Sparrow, the bartender, who kept the drinks flowing.

Hanging out at the bar, getting free drinks from Hank while flirting with the girls, were The Kambal. The twins were in their usual business suits and their business was to always keep Alexandra safe from harm.

On the left side of the club are six alcoves, which had plush velvet couches and pillows; red velvet curtains which could be drawn for privacy. Of course, Alexandra kept security cameras in the alcoves, for not everything could be kept private from her.

Beneath Alexandra's viewing window was the stage, where The Last Breath was playing their latest dirge. The band was dressed like they were about to attend a funeral during the times of the Black Plague. Isabel, their lead vocalist wailed and the crowd swayed to her sorrow. 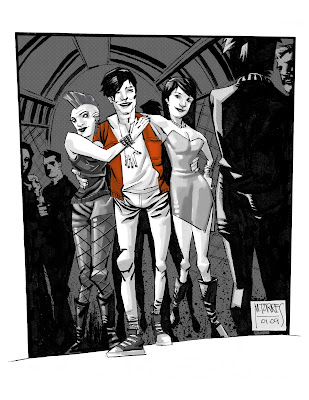 As band segued to their next song, Alexandra saw a new group stumble into the club. They were lead by a man who smiled at every girl that looked his way. His red jacket seemed to blaze in the crimson lights of the club.

He looked around and smiled even more. He liked what he saw.

He popped a cigarette in his mouth, placed his finger on the tip of the cigarette and a bright blue flame shot out to ignite his Malboro.

Brim's troupe, which looked like already had a drink from every bar down the road, did a conga line to one of the alcoves where they ended up sprawled all over the velvet couch and yelled for a waiter to attend to them.

Alexandra knew they were going to be trouble.

The moment she stepped out of the door marked “Private”, the Kambal were already at the foot of the steps, ready to keep by her side.

She went to the bar and asked Hank if everything was okay.

“Okay. Alright, bossing,” Hank replied. “Except we got those three ladies over there who've ordered nothing but water. Bad for business, bossing. They've just been eating the free salted nuts.”

Trese glanced at the three women dressed in what looked like black raincoats. They were huddled around the table and kept looking at all the people who entered the door.

“Give them a round of whatever they want. My treat. Maybe they'll order more,” Trese said.

Alexandra was more concerned with Brim and his group. As he made her way across the club, the Kambal floated two steps behind her.

She stepped into their alcove and their party was already in full swing. Brim was entertaining two girls-- or it was more like, the two girls were entertaining Brim. The girl on the left had a purple mohawk and looked too young to be drinking anything in the club. The girl on the right looked like your typical shampoo model, complete with the long, shiny hair and the fake smile. Brim really liked variety.

“Brim . Didn't you see the sign at the door? `No solicitation`.”

“Funny girl,” Brim laughed. “I'm here for some fun and some drinks and some of that dreadful music. I am here for pure pleasure. No business whatsoever.”

“Then why did one of your girls just walk out with one of my customers?”

“Can I help it if my friends are friendly?”

As if to emphasize Brim's point, mohawk girl kissed him on the neck and slowly unbuttoned shirt and caressed his chest. Shampoo Gal did the same and as she pulled out her hand, a small golden pendant-- a stylized letter “T”-- slipped out of Brim's shirt.

“Inang! He's the one!” someone yelled from behind.

Trese whirled around to see the three women in the black raincoats rush to the mouth of the alcove.

“The murderer with the trident!” yelled the tallest of the three. They held out their palms and all the water in the glasses on the table shot into the air and flowed towards them. They closed their hands and the water solidified into a long, sharp bolos.

“Where are my sisters?” their leader pointed her shimmering bolo at Brim.

Brim pushed the girls away and jumped on the table. He opened his palms which burst into flames. “Back off, fish bitch!”

Seeing what was happening in the alcove, Hank raised his hand in the air and signaled to Isabel on stage.

Isabel also raised her hand, thumb holding down her index finger, and the band knew exactly what to do.

The melody shifted and Isabel started to weave a in a new song. The crowd stopped drinking, stopped eating their barchow, stopped chatting with whoever was beside them. The people in the club suddenly found themselves staring at the band and listening intently. Nothing else mattered except the song. Not even the unusual fight that was occurring in the alcove.

Brim suddenly realized one of the Kambal was right behind him, pointing one gun to his head and another gun to the lady with the bolo.

The other Kambal was right behind the two women and had them covered with his guns.

“Brim! What's this all about?” Trese glared.

“Hey! I came here to party. I didn't cast the first spell,” he said as he extinguished the fireball.

“Maybe he's one of your ex-girlfriends?” suggested the Kambal. “C'mon! Admit it!”

Trese turned to the woman who already lowered her blade.

“I am Zabelle from the tribe of Dyessa.”

“A month ago, my sister disappeared. She was seen boarding a ship with the trident symbol on it. Then a week after that, more sirena from my tribe started to disappear.”

Zabelle looked at Brim. “We were told that a fire elemental who bears the trident symbol was seen here. We want him to return our sisters!”

“Hey hey hey! I don't know anything about any missing sirena. None of my girls are fishy.”

“Actually, one of them has a funny smell,” one of the Kambal cocked his head to girl with the mohawk.

Trese stood in front of the girl. A silver kriss suddenly appeared Trese's hand. Did it come from under her sleeves or did it appear out of thin air? Brim wasn't sure.

She tapped the forehead of the girl with the tip of the kriss. In one fluid, downward motion, she sliced the air in front of the frightened girl and for a moment everyone could see the girl's long flowing hair, her sapphire blue skin, and her long rainbow-colored mermaid tail.

As soon as Trese put her kriss away, the glamour resumed and Tereza was once again human legs.

The Kambal couldn't help but giggle.

“I'm afraid she's telling the truth,” announced Alexandra. “She's maybe have been transformed, but she's not being held by any binding spell.”

“What about our other sisters? Where are they?” Zabelle looked more confused than angry.

“Told you I didn't have anything to do with that!” Brim smiled. “In fact, me and Tereza have been avoiding going to the docks or to the beach to avoid getting seen by some fish who might squeal on us.”

Trese gave them that look and they quickly kept quiet. She turned back to the party in the alcove and said, “Brim. All of you. Leave now.”

Trese approached the lead sirena, held her hands. “Zabelle, I'll do what I can to find out what happened to your other sisters. I promise.”

“Thank you. I am sorry for causing you so much trouble. The Treses were always kind to our tribe.”

“Tereza, this is not yet over. You'll still have to answer to inang.”

And the Kambal just couldn't hold it in anymore and burst out laughing.


The band's improvised song came to an end and everyone yelled for more.

Alexandra and the Kambal went back to the bar.

Hank placed an ice, cold bottle of beer in front of Trese.

Trese's cellphone beeped.
She looked at the text message.

Trese pushed back the beer। “Give me another mug of coffee, Hank. Looks like it's going to be a long night.”

One Last Drink at the Diabolical
Story by Budjette Tan
Art by Mark Torres
http://mytymark.deviantart.com/